Why should I play this game anymore?

Since I always loose because I get thrown against players way above my skill level, what’s the point in playing this game anymore? It seems the developers obnly care about their beloved pro players and give a -Yoink- about anyone else. They “fixed” the matchmaking in terms so pro players will have a lot of fun killing normal players, but who cares if normal players will have fun? See screenshot below: This is the worst matchmaking ever.

Do you reraly belive you will sustain this brand if you only care for pro players?

I don’t want to play against players who can kill you with a single pistol shot acrot the whole map.

Look at this matchmaking: 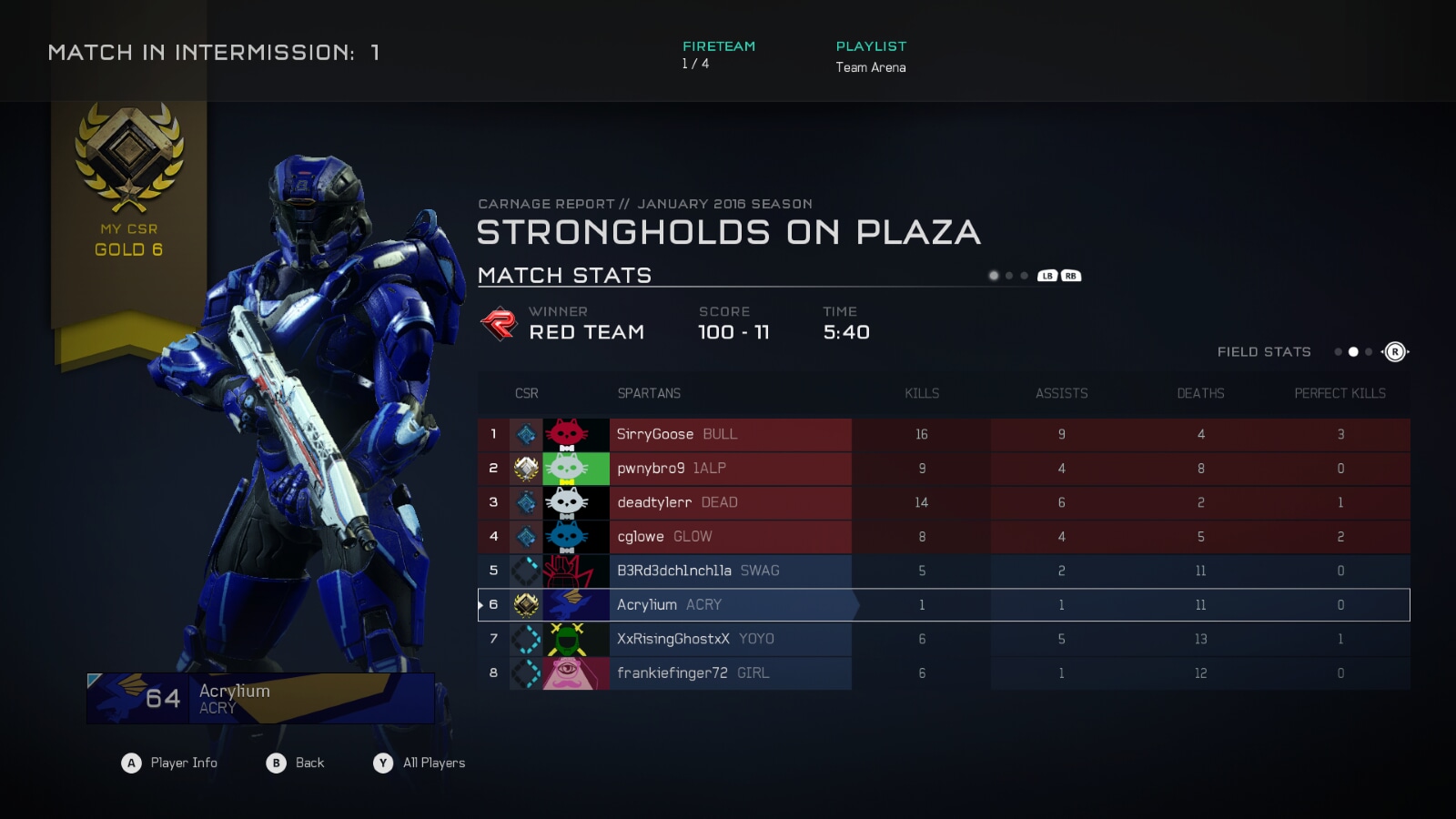 Leave then… You won’t be missed.

Maybe try joining a spartan company Or playing with friends and form a strategy.

Way to encourage more people to play Halo 5, folks! As for OPs question: honestly, if you are just getting frustrated and not having any fun you should give yourself a break from Halo 5. I also get some pretty one sided games but hey I am one of the worst Halo 5 players out there so any team that gets me is already handicapped to begin with. But I still keep playing since the core gameplay is so damn rewarding. As for having more fun: try playing with some friends and/or joining a Spartan Company.

First off: No one can kill anyone with a single pistol shot across the map unless you’re referring to SWAT. If you ARE referring to SWAT, then that’s a pretty easy thing to do even for low level players. If you’re saying your shields were down and someone headshotted you across the map with a pistol that’s also not particularly difficult.

That was obviously a rough game, and it sucks that you ended up with a group of players with still-pending ranks, but as far as the matchmaking itself: You were paired against other high level golds and low level platinums, which is dead-on. The only issue here is if you won too many games during your rank-determining matches, which could’ve happened if you were placed with really good teams, and therefore you would’ve gotten a higher rank than you deserved. If that is the case, ranks will reset at the end of the January season and you should be able to earn a more fitting rank.

If you hate the ranking/matchmaking system in Arena, I recommend Warzone. Warzone has such big teams that they sort-of naturally balance out most of the time (Unless you go up against a party). It’s also much less competitive and is more about having fun than aspiring to maintain a good K/D. That may be more up your alley than the competitive Arena playlists in place now.

Matchmaking works when it comes to solo matching but when people match in groups it gets weird. If you are Onyx and you group with 2 people that are gold then the matchmaking system wiill try to balance it out and place you against platinums which is completely unfair as the Onyx can easily carry golds against platinums. If you are silver like the guy in that screenshot is and you are grouping with diamonds, you should go against diamonds. The game shouldn’t try to balance it out which just creates unbalanced games.

If you can just get a few good games it makes up for the bad ones. This game can be so bipolar. I can be +10 one match and -5 the next. Hang in there. Warzone is bound to be tough for new folks with no reqs though. By this point lots of folks can pretty much call in whatever they want.

You could have won a lot of your ranking games like I did and get placed with a bunch of high ranking people, but if you keep losing you will drop in rank to people your level

I was thrown against 3 Diamond players , while I am only Gold. That’s what I call bad matchmaking.

I have no friend owning an Xbox, so I can’t play with friends.

Ok, best thing will be to wait till February when ranks reset. See you then. Thank’s for the advice.

Gotta love this horrible ranking system, eh? Honestly, I say don’t bother with Halo 5 anynore until they get these issues fixed. Play another game you can actually have fun on.