Undecided on H5: Which reviews will convince you?

I realize that some players have made up their mind about buying or not buying H5. This post is not aimed at challenging your decision in any way.

But for those who were let down by H4 and/or MCC, and are now on the fence and waiting to purchase after you read some reviews, who will you trust?

It seems unlikely that H5 will be as broken as the MCC at launch. And, if it is, you’ll quickly learn about it. So, in that case, there is no problem in getting information that will help you decide whether to make a purchase.

But for many, the multiplayer (MP) in H4 was unsatisfying and that is a harder problem. Arguably, it takes a significant amount of time to determine if the MP is well-balanced and polished enough to sustain the kind of player base we’ve seen in some previous Halo releases.

Can reviewers reasonably give a verdict on H5 MP given that they will want to release their respective reviews without too much delay? If they cannot, then where can you find this information? As a start, I’ve begun collecting a list of reviewers (I am not claiming any are authoritative) who commented on H4; more specifically, those whose reviews included comments on the MP. I’ve grouped them by negative, mixed, and positive.

As you can see, most reviews were positive. For those who fall into the “H4 MP was meh” category, I would humbly suggest considering their future reviews of H5 with a healthy dose of skepticism.

Please feel free to add to this list. If you think there are forums that are useful or should be avoided, please list them along with a gentle explanation of why. Even better if someone knows of any site that can provide hard numbers (average # games played per player, population count, etc.) that on-the-fence players can view.

Paul Tassi
http://www.forbes.com/sites/insertcoin/2012/11/01/halo-4-review/2/
“This is a game that fully understands the fundamentals of a good shooter.”
“For the first time, Halo feels like a follower, rather than a leader.”

A thrilling, moving story and intense competitive multiplayer help Halo 4 continue the series' reign as one of the premier shooter franchises.

Halo 4 isn't just the return of Master Chief, it's the beginning of a new era for the franchise. Can it live up to the legacy? What if it's even better than ever?

Called it a “bar-raising triumph”

I have finally reached level 130, this is the highest rank possible in Halo 4, and I though I would do something special for it.One thing I always hat

“Halo 4 is a 4 out of 5 in terms of the multiplayer experience for me.”

Halo 4 review: the ghost in the machine

Halo 4 is the best campaign experience in a shooter this year.

“Halo is in new hands with 343i, but the studio nailed exactly why the series became a genre-defining franchise”

“With Halo 4, 343 has proven itself not only proficient in building a Halo game, but capable of building a better Halo franchise in a post-Bungie world.” 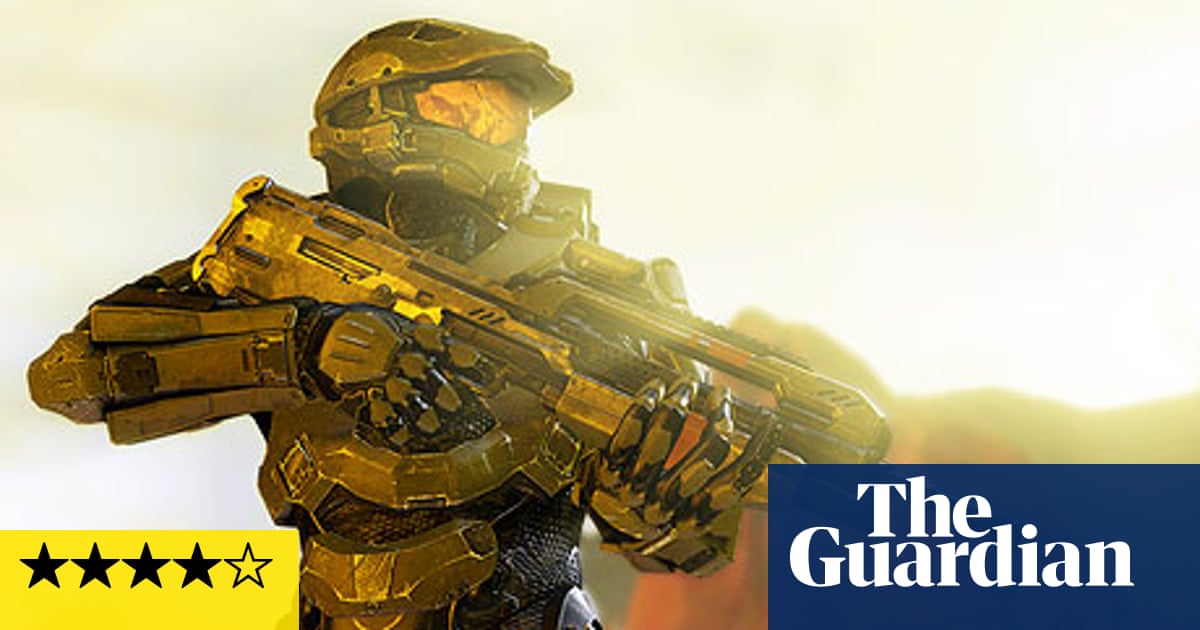 Halo's latest iteration looks gorgeous, and though it feels darker than previous editions, is a brilliant addition to the franchise. By Nick Cowen

“So with its strong multiplayer present and correct, Halo 4 remains true to the legacy of the first entry in this in videogame series.”

“Perhaps more worrying were the concerns that Halo 4 might see a move to more linear, Call of Duty-like levels, but in fact these fears are all but unfounded.”

Halo 5 is going back to the roots but also making halo better. The beta a lone was much more enjoyable than 4 and its not gonna have the dumb gimmicks that arnt needed like perks/loadouts. The game is already focusing on equal starts and a balanced multiplayer. Plus i mean no armor abilities that you dont have. No Promethean vision, invis AA, jetpack or any other AA. Finally halo is getting something right.

The new spartan abilities that everyone has look awesome. Also the maps show so far look promising and gameplay was just great. Relying on reviews is kinda dumb since its not your opinion. Ask others and see what they think who have played the beta. I bet most of them will tell you that it was better than 4 and well worth it.

Also halo 5 isnt being outsourced like mcc was so it wont have any of the main issues that mcc had like bad ports and major bugs. Halo 5 is being worked on ONLY by 343i. So that alone should give you some reassurance. Everything 343i had done or said about halo 5 has been greatly beneficial.

I hope this helps with your decision. Also why not get the game when halo 4, reach and mcc were all kinda downers. I enjoyed reach and h4 a lot but they werent what i expected. Trust me… halo 5 will be epic. =]

When it comes to Halo, I don’t care about reviews.
I’m going to get it day 1, just I try to usually.
I loved the beta to death, can’t wait for the full game.
For now, I gotta finish MGSV.

If you look at reviews by people in the industry (IGN, Kotaku, so on), they tend to give blind praise to any AAA title that comes out while glossing over issues. Their opinions are usually completely detached from those of the more hardcore gaming community as well.

Playerbase reviews suffer from different problems. They are a lot more in-touch with the community, but at the same time they are littered with “pundits” that fall under all extremes of the spectrum, circling the wagons from their soapboxes, posting mindless nonsense to gain meaningless followers. “Why Pre-Ordering means you despise Halo”. “How Nostalgia is ruining the Community”. Ugh.

Angry Joe, reviewtechusa, and anyone not affiliated with main stream media IE IGN, Gamespot, ect. Also i would listen to waypoint’s own davidjcobb for sure. Because they wont sugar coat anything and will tell you every problems with it.

> 2533274841536956;5:
> Angry Joe, reviewtechusa, and anyone not affiliated with main stream media IE IGN, Gamespot, ect. Also i would listen to waypoint’s own davidjcobb for sure. Because they wont sugar coat anything and will tell you every problems with it.

I’m not going to lie…Ryan from IGN is always quick to dry hump anything Xbox related.

> 2533274841536956;5:
> Angry Joe, reviewtechusa, and anyone not affiliated with main stream media IE IGN, Gamespot, ect. Also i would listen to waypoint’s own davidjcobb for sure. Because they wont sugar coat anything and will tell you every problems with it.

I was under the impression Reviewtechusa hated xbox and stopped reviewing their exclusives. Even made a video as why he sold his Xbone.

> 2533274814669908;1:
> Can reviewers reasonably give a verdict on H5 MP given that they will want to release their respective reviews without too much delay? If they cannot, then where can you find this information?

No, they cannot. The problem with reviews is that they get a very limited time playing the game because the review has to be out of the door fast. The reviewer can only get a first impression of the game, and has no idea of how the game will feel like after a month of playing. New things always look better than they are because you need some time for your hype to die down (which will cloud your judgement), and even more time to figure out the more subtle issues. Aside from a few negative nancies, all reviews tend to be overly generous, and that’s not even considering possible deals with the publisher. Reviews are not to be trusted.

The thing is, there’s no such thing as first day accurate information. Moreover, there’s no such thing as “accurate information”, because how good a game is is ultimately nothing but a subjective judgement. At the end of the day, all you can really do is take everything you’ve heard about the game from anyone, and make a personal judgement based on that.

I want to see what Angry Joe does for it. I truly enjoy his reviews

Just like anything I take reviews with a grain of salt - I generally don’t put much stock in them, they can often say some very insightful things about a game but they can just as often get it wrong, and it can be hard to differentiate.

It’s so subjective, what one guy likes you might hate, what on guy hates you might love or not care about, or they might miss something huge.

It’s also entirely possible to hate the look or sound of a game, but fall in love with it once actually playing it yourself.

I myself generally watch as much pure gameplay as I can if I can’t get my hands on a demo, and make up my own mind based on that.

Nobody I don’t trust any reviewer especially the bigger ones. I watch Angry Joe’s reviews purely for entertainment purposes.

People, just stay away from reviewers. Pick any game, movie or music album, and you can find professional reviews that range from “the worst ever” to “the best ever”.

The problem with reviews, as has been stated a few times, is that they are purely subjective. Whilst it can be very useful to read reviews when considering purchasing anything; the problem is that if you base a purchase only on that review, you are heavily relying on the reviewers opinion, bias and experience - all of which are almost guaranteed to be different from your own.

By all means read reviews, as many as you can find - the more you read, the higher the possibility of ironing out each of the reviewers personal bias. If you don’t intend to purchase H5G at release, ask people you know and trust who have purchased the game - their opinion is more likely to match your own.

In the end the only opinion that counts for anything with regard to your enjoyment of a game is your own.

When it comes to Halo it’s a guaranteed purchase for me just like any Forza is. I’ve been playing both franchises for 10+ years so I trust the studio (343 a little less) to truly deliver a great experience in the next installment in each franchise.

I really don’t read reviews anymore. I follow IGN for gaming news and such but I stay clear of their reviews and many other reviews. To be honest I prefer to hear what the community have to say.

All that matters is it is a great game in my eyes.

Same here that guy can be hilarious. Look up his review on that Rambo game that came out a while back, man that game looked awfull lol.
As for any other reviews I don’t really tend to listen to them, I remember when Ryse came out it got crap reviews but when I played it I really enjoyed it.